Now that the dust from Alabama’s A-Day game has settled, it’s time to evaluate the Crimson Tide. Coach Nick Saban referred to the spring scrimmage as a “midterm” for the team, a way for the coaching staff to see what needs improvement before Fall 2015 rolls around. In the spirit of midterms and evaluations, let’s grade the 2015 Alabama Crimson Tide position by position and see where the team is either sharp and ready, or a little rough around the edges. Pencils ready…Begin.

The members of the first-team offensive line are pretty much settled at this point, and overall the unit did well, but the group is a long way from the dominating presence of Barrett Jones and company. In the A-Day game, the first and second offensive lines gave up a total of eight sacks, and the running backs struggled to find clear holes to break big plays. The good news is that Ryan Kelly has proven himself as a leader in the trenches, and Cam Robinson is still a force to be reckoned with. The line should improve when four-star recruits Brandon Kennedy and Lester Cotton arrive on campus for fall practice and start competing for starting spots. Even if they don’t contribute immediately, the depth will help in the case of another national championship run.

Alabama fans are accustomed to having a stable of Heisman-quality running backs, but in 2015, that won’t be the case. The Crimson Tide is thin at the running back position to say the least, with only two names coming to mind. Derrick Henry is the man for this year. The 6-foot-3-inch, 242-pound bruiser will get plenty of carries as the workhorse, as long as he stays healthy. Kenyan Drake is the wildcard of the offense. He played in a black, non-contact jersey because he’s still recovering from a broken leg that ended last season early for Drake. He has good hands and blistering speed, so he can break big plays as a running back or as a receiver when he’s 100 percent again. Offensive coordinator Lane Kiffin should have a field day with Drake in his high-powered offense. 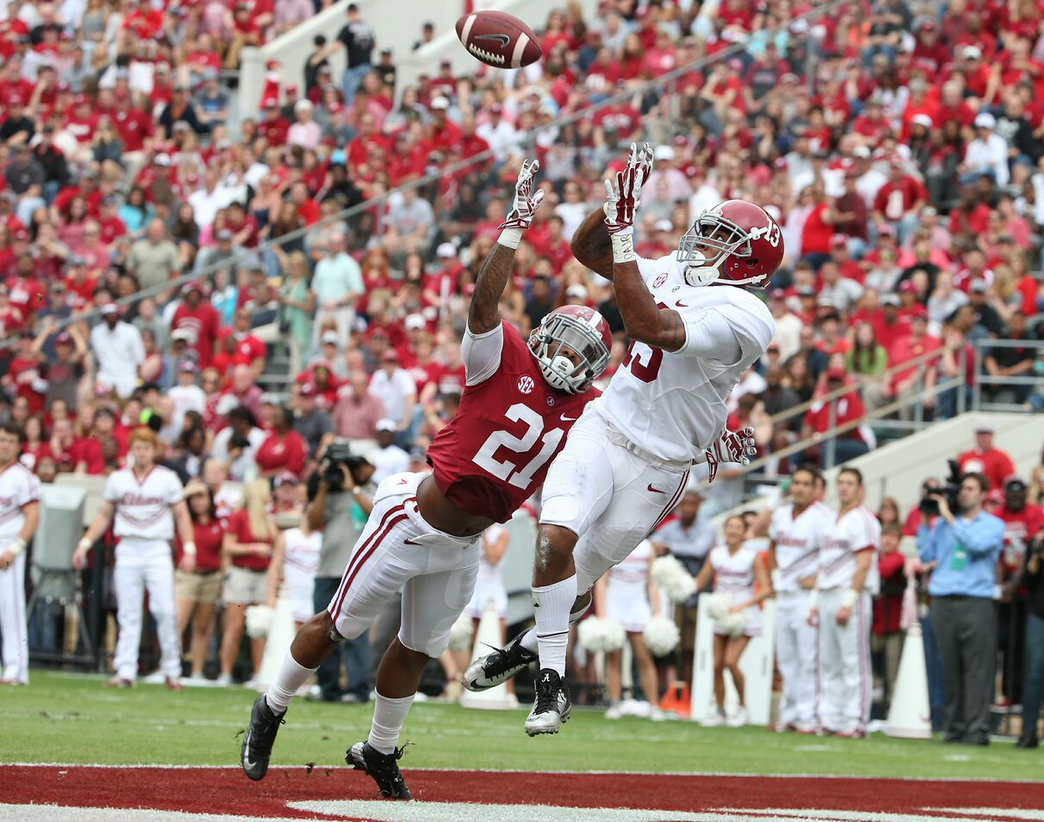 Alabama’s receiving corps had the best showing at A-Day. Even though the Tide lost Amari Cooper, Christion Jones and DeAndrew White, the team is in good hands. ArDarius Stewart and Robert Foster combined for 243 yards and two touchdowns at A-Day, even when quarterbacks were constantly being rotated. Both receivers showed they could make big catches down the field, which bodes well for whichever quarterback settles in to the starting role. Not to mention Calvin Ridley, the No. 1 receiver prospect in the country, will enter the mix this fall. As long as the starting QB can sling the ball, Alabama will have plenty of highlights from the receivers this year.

Jake Coker looks like the guy, but none of the quarterbacks looked great at A-Day. The five quarterbacks threw five interceptions, and seemed to all be on different pages with the receivers. This is the position everyone is talking about because Jake Coker might have finally stepped up and shown he can be the starter. Before you assume anything, however, remember that Blake Sims did not look like a starter last year at A-Day, and he ended up leading the team to an SEC Championship and the College Football Playoffs.

All around, Alabama’s defense looks solid. Anchoring the defense is a defensive line that should be able to pressure opposing quarterbacks well this year. At A-Day, both defensive lines combined for eight sacks, and pressured the quarterbacks regularly. The line will feature a mix of experienced playmakers like A’Shawn Robinson and young talent like Da’Ron Payne. Hopefully the veterans will be able to set an example for the new recruits and make opponents think twice about running up the middle.

Alabama’s linebackers are straight-up nasty this year. Fans should look forward to a season full of Reuben Foster’s trademark bone-crunching tackles and Reggie Ragland’s explosive playmaking abilities. This is one position where the Crimson Tide has plenty of depth and competition for starting spots. This group is Alabama’s best chance at re-establishing itself as a team that opponents hate to play against.

Big pass plays have been the Achilles’ heel for Alabama in recent years, but this year’s group is laying the foundation to change that. At A-Day several long completions were given up, but defenders were never too far behind. For the first time in two seasons, the Tide has a new assistant coach — Mel Tucker from the Chicago Bears — to focus just on the defensive backs, which should help bring the group up to snuff. Last year, Bama’s high-powered offense made up for mistakes in the secondary, but with the quarterback situation in question, it’s up to the defensive backs to step up and keep the game in front of them.

JK Scott is rock solid, but anybody who saw him punt last year could have told you that. He has a heck of a leg, and he has consistency. Adam Griffith, however, is still lacking the consistency and swagger that Scott has. Griffith missed two of his four attempts at A-Day, including an easy 37-yarder. While Scott has proven to be a special teams weapon, Griffith seems destined to be an average kicker. Bama fans are tired of squirming in their seats and holding their breath during field goal attempts, so let’s hope he proves himself this year.

More in this category: « Dragon Boat Races return to Tuscaloosa Things to Do: YFC’s Legacy Golf Tournament »
back to top
Subscribe to this RSS feed

City of Tuscaloosa to Host Househol...